Large boarhounds resembling the Great Dane appear in ancient Greece, in frescoes from Tiryns dating back to the 14th–13th centuries BC.

These large boarhounds continue to appear throughout ancient Greece in subsequent centuries up to the Hellenistic era.In Austria and Germany the Molossian hound, Suliot dog, and specific imports from Greece were used in the 18th century to increase the stature of the boarhounds whereas, in Ireland, it was done for the wolfhounds.

In the middle of the 16th century, the nobility in many countries of Europe imported strong, long-legged dogs from England, which were descended from crossbreeds between English Mastiffs and Irish Wolfhounds. They were dog hybrids in different sizes and phenotypes with no formal breed.These dogs were called Englische Docke or Englische Tocke – later written and spelled: Dogge – or Englischer Hund in Germany. The name simply meant “English dog.” Since then, the English word “dog” has come to be associated with a molossoid dog in Germany and France.These dogs were bred in the courts of German nobility, independent of the English methods, since the start of the 17th century.

The dogs were used for hunting bear, boar, and deer at princely courts, with the favorites staying at night in the bedchambers of their lords. These Kammerhunde (chamber dogs) were outfitted with gilded collars, and helped protect the sleeping princes from assassins.

While hunting boar or bears, the Englische Dogge was a catch dog used after the other hunting dogs to seize the bear or boar and hold it in place until the huntsman was able to kill it. When the hunting customs changed, particularly because of the use of firearms, many of the involved dog types disappeared. The Englische Dogge became rare, and was kept only as a dog of hobby or luxury.

In the 19th century, the dog was known as a “German boarhound” in English-speaking countries.[29] Some German breeders tried to introduce the names “German Dogge” and “German Mastiff” on the English market, because they believed the breed should be marketed as a dog of luxury and not as a working dog.[25] However, due to the increasing tensions between Germany and other countries, the dog later became referred to as a “Great Dane”, after the grand danois[30] in Buffon’s Histoire naturelle, générale et particulière in 1755. 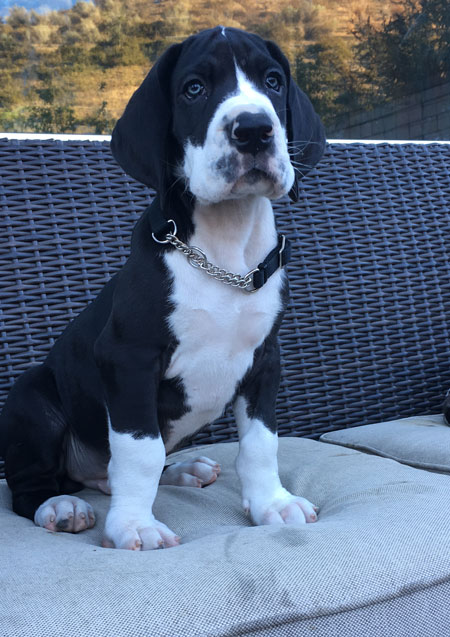 The Great Dane is a large German domestic dog known for its giant size.

As described by the American Kennel Club:
The Great Dane combines, in its regal appearance, dignity, strength, and elegance with great size and a powerful, well-formed, smoothly muscled body. It is one of the giant working breeds, but is unique in that its general conformation must be so well balanced that it never appears clumsy, and shall move with a long reach and powerful drive. The Great Dane is a short-haired breed with a strong, galloping figure.
In the ratio between length and height, the Great Dane should be square. The male dog should not be less than 30 in (76 cm) at the shoulders, a female 28 in (71 cm). Danes under minimum height are disqualified.

The minimum weight for a Great Dane over 18 months is 120 lb for males, 100 lb for females.Unusually, the American Kennel Club dropped the minimum weight requirement from its standard. The male should appear more massive throughout than the female, with a larger frame and heavier bone.

Great Danes have naturally floppy, triangular ears. In the past, when Great Danes were commonly used to hunt boars, cropping of the ears was performed to make injuries to the dogs’ ears less likely during hunts. Now that Danes are primarily companion animals, cropping is sometimes still done for traditional and cosmetic reasons. In the 1930s when Great Danes had their ears cropped, after the surgery, two devices called Easter bonnets were fitted to their ears to make them stand up.[ Today, the practice is common in the United States, but much less common in Europe. In some European countries such as the United Kingdom, Ireland, Denmark, and Germany, and parts of Australia and New Zealand, the practice is banned or controlled to only be performed by veterinary surgeons.

The three varieties have five to six (depending on the standard) show-acceptable coat colors:

Black: The colour is a glossy black. White markings on the chest and toes are not desirable and considered faults.

Harlequin: The base colour is pure white with black torn patches irregularly and well distributed over the entire body; a pure white neck is preferred. The black patches should never be large enough to give the appearance of a blanket, nor so small as to give a stippled or dappled effect. Eligible, but less desirable, are a few small grey patches (this grey is consistent with a merle marking) or a white base with single black hairs showing through, which tend to give a salt and pepper or dirty effect.
Grey merle (Grautiger) dogs are acceptable in conformation shows under the FCI as the grey merle dogs can produce correctly marked black/white harlequin dogs, depending on the combinations. The aim for deleting the color grey merle as a disqualifying fault is to provide a wider gene pool.Their status is that they are “neither desirable nor to be disqualified”. Consequently, this colour must never obtain the highest grading at dog shows.

Grey merle (Grautiger) dogs are acceptable in conformation shows under the FCI as the grey merle dogs can produce correctly marked black/white harlequin dogs, depending on the combinations. The aim for deleting the color grey merle as a disqualifying fault is to provide a wider gene pool.Their status is that they are “neither desirable nor to be disqualified”. Consequently, this colour must never obtain the highest grading at dog shows.

Mantle  The color is black and white with a solid black blanket extending over the body; black skull with white muzzle; white blaze is optional; whole white collar preferred; a white chest; white on part or whole of forelegs and hind legs; white tipped black tail. A small white marking in the black blanket is acceptable, as is a break in the white collar.

Blue: The colour is a pure steel blue. White markings at the chest and toes are not desirable and considered faults.

The Great Dane’s large and imposing appearance belies its friendly nature. They are known for seeking physical affection with their owners, and the breed is often referred to as a “gentle giant”.

Great Danes are generally well disposed toward other dogs, other non canine pets, and familiar humans. They generally do not exhibit extreme aggressiveness or a high prey drive. The Great Dane is a very gentle and loving animal and with the proper care and training is great around children, especially when being raised with them. However, if not properly socialized, a Great Dane may become fearful or aggressive towards new stimuli, such as strangers and new environments.

Great Danes are a breed recommended for families provided that they get trained early and onwards, regarded by animal experts due to their preference for sitting on and leaning against owners as “the world’s biggest ‘lapdog’. 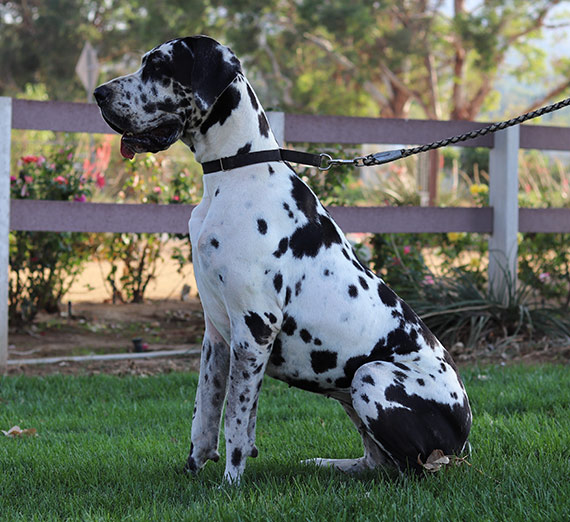 Like most dogs, Great Danes require daily walks to maintain their health. However, it is important not to over exercise this breed, particularly when young. Great Dane puppies grow very large, very fast, which puts them at risk of joint and bone problems. Because of a puppy’s natural energy, Dane owners often take steps to minimize activity while the dog is still growing.

Given their large size, Great Danes continue to grow (mostly gaining weight) longer than most dogs. Even at one year of age, a Great Dane continues to grow for several more months.

Great Danes, like most giant dogs, have a fairly slow metabolism. This results in less energy and less food consumption per pound of dog than in small breeds. They have some health problems that are common to large breeds, including bloat . To avoid bloat, a rest period of 40 minutes to one hour after meals is recommended before exercise.Their average lifespan is 6 to 8 years; however, some Great Danes have been known to reach 10 years of age or more. Like many larger breeds, Great Danes are at particular risk for hip dysplasia. 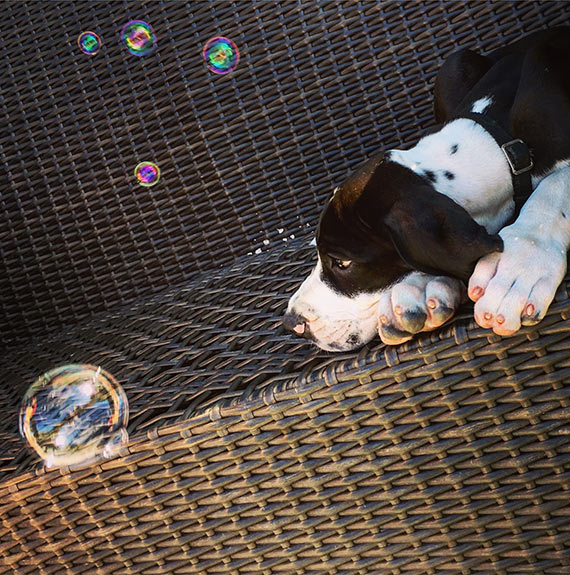